In the model year 1996, the model series 993 4S appeared in the cloak of the 993 Turbo, but with conventional tail spoiler.

Just like in the Factory Turbo Look - FTL models of earlier series, chassis and brakes of the Turbo were adopted to fit this car, as well as the widened bodies and its PU front and tail. Also, this model was equipped with all-wheel drive, like the Turbo. 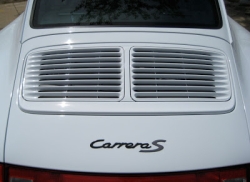 Just one year later, to the model year 1997, Porsche released the 993 Carrera S, internally 993 340 for the LHD (LHD) incl. the US version (here are 4 cars for the model year 1996) and 993 341 for the right-hand drive (RHD). As for the 993 Carrera 4S with the body of the Turbo, but with suspension and brakes ruled the cutbacks. There the conventional components of the Carrera 2 were installed and also the all-wheel drive had been waived.

One easily identifies the often "2S" called Carrera S by its black brake calipers and its divided lattice of the tail spoiler.

At that time, rather launched as a "savings model", is the often as "2S" dubbed Carrera S today the most sought variant and scored with lovers usually the better price. The Carrera S obtained, because it significantly differed from the mature concept of the turbo looks, consequently its own M-Code:495 = Carrera S. The M-Code 491 and the extension "Turbo-Look" can be found on this model even internally no longer!

Surprised, because all books show other counts and also Porsche indicating lower numbers? Each specified car can occupy the Turbo-Look Register with a chassis number. Less than shown are not possible! 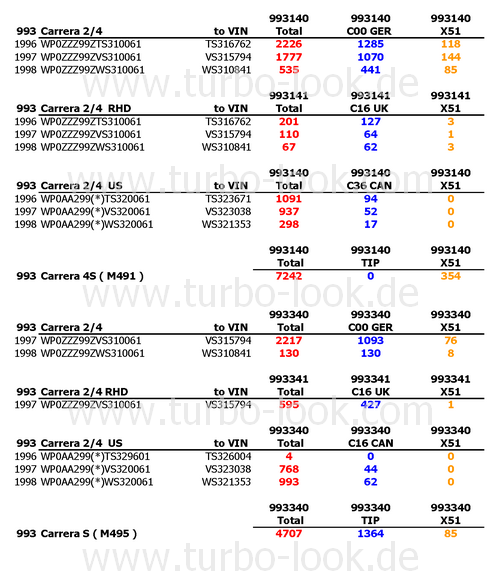 Porsche had already adopted in this final drive turbo-look model from the exclusive small series for WTL models. Up today the 993 Carrera 4S remains to be the last model, that got the M-Code 491in its certificates of birth and is with a wide margin the best selling modellvariant of the Porsche 911 with Turbo-Look.

For capacity reasons, TLR list the 993 not online until someone is willing to take care for these cars.